In primary schools in Oud-Vossemeer a lesson about the origin of the village, Roosevelt and the four freedoms is part of the school programme. A visit to the Ambachtsherenhuis each year in November is included in this lesson.

The foundation is currently planning to develop an educational programme along the same lines. 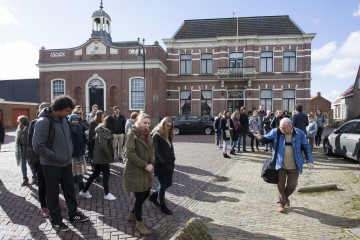 Visit by the students of the Four Freedoms research course

On Wednesday the 24th of February, about 40 students of the Roosevelt University College Middelburg paid a visit to Oud-Vossemeer, in order to get acquainted with the local history of Roosevelt. They were given a tour of the Ambachtsherenhuis and the church by municipal archivist Fred van den Kieboom and Kees de Koning from the Roosevelt foundation. They also visited the Four Freedoms monument, the Blacksmith’s clock and the place in the Raadhuisstraat where the house of Roosevelt used to be. The international group of students was enlightened on the Dutch family Van ‘t Rosevelt and her involvement in the Ambachtsheerlijkheid, but also on the local roots of the American Roosevelts and the connection of Oud-Vossemeer to the Four Freedoms Awards. The students were also told about the development of the Roosevelt information centre and its touristic background.

The students were either following a Four Freedoms research course with professor David Woolner of the Roosevelt Institute and the Marist College, or taking a course in journalism (with freedom as one of its central themes) with dr. Anya Luscombe.